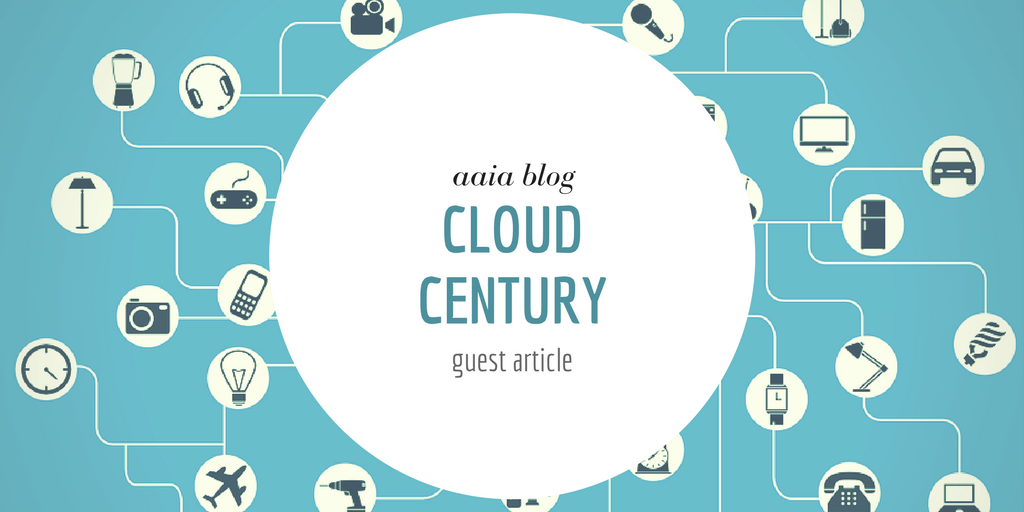 This guest article of aaia member and expert Marcus Oppitz offers a deep dive into developments and data of the Cloud Century. Enjoy!

Typing “cloud” into a search engine will deliver more than 1 billion results within half a second. Many of the results refer to terms like cloud computing, cloud industry or cloud services. The 21st century is on its way to become the Cloud Century as successor of the Electronic Century and the industrial revolutions of the 18th, 19th and 20th century. The underlying pattern these quickly growing ecospheres are network based and service oriented ecosystem. Those ecosystems are based on networks, new technologies, a set of standardized end devices and finally a quickly growing nexus of successful and partly disruptive business models. Building network based services is not new but compared to forerunners like railway, telegraph, telephone, radio or TV those network and service based ecosystems are global, borderless, multi-purpose and integrate thousands and millions of players as providers and consumers. They are also a rapidly growing foundation for new technologies and enabler of new businesses. Their influence on society and politics is dramatic.

Transition from the Electronic Century to the Cloud Century

With the introduction of the Internet in 1980, the Web in 1990 and cloud computing technologies around 2010, the share of IT in the global GDP began to grow at high speed. In the first decade of the 21st century, IT has reached a volume of around 10% of the average GDP worldwide including the expanding Internet business at a level of between 4 % and 6 % in 2016. The number of Internet users has reached nearly the half of the world population, Internet and cloud services like email or social media exploded in numbers and influence on society, economy and politics.

The Internet evolved to the largest global technical infrastructure connecting billions of users and millions of enterprises with more than 1 billion websites operated on hundreds of millions of hosts. According to Cisco’s VNI (Visual Networking Index) in 2016, the overall IP traffic will be around 194 Exabytes per month in 2020 which is triple the total amount of 2015. This equates to 511 Tbps (terabit per second) being sent or equal to 142 million people streaming high definition Internet videos simultaneously. Beyond that numbers, the effect of the quickly expanding Internet and cloud business influences almost each segment of economy and the personal life of consumers. The term coined to describe that effect is “digitalization” empowered by the dramatic expansion of the Web within only two decades combined with an accelerating availability of new technologies like global broad band connections, GPS, mobile end devices, virtualization, cognitive computing, cyber-physical systems and many others. The new technologies enabled by mature and global network based ecosystems also create huge opportunities for new and disruptive business models based on service ecosystems and following the principles of sharing resources together with new models of ownership and the growing importance of data as value.

The Challenge of Paradigm Changes

As consumers, citizens, managers and entrepreneurs we are right in the middle of a thunderstorm pushing our economy and society into a new age. The journey into the Cloud Century started only 20 years ago, and is accelerating at high speed triggered not only by technology but also by new paradigms changing our perception of society, economy and politics. Compared to the 1st, 2nd and 3rd industrial revolution in the 19th and 20th century we experience an increasing number of paradigm changes within shorter intervals. Since the making of the internet and the Web and its expansion into the largest global technical infrastructure we accepted new paradigms like  “An open society needs open systems”, “The network is a common resource”, “We live in a global village”, “Access to information is free”, “Data is value and currency”, ”Production costs are no longer the driver”, “Sharing is better than owning”, “The default status of users is mobile”, “Services are delivered from a virtual space to a global space”, “Peer-to-peer can replace centralized services”, “There is a cyberspace in the machine” and ”Machines (can be) intelligent”. All those new paradigms had been and still are triggers for new businesses. Moreover, those changes struck our society, business and economy within a short period of not more than 20 years.

Digitalization and Innovation as Industry

The impact of digitalization on industries is massive and influences internal production processes as well as customer and provider relations. As a consequence, innovation based on new technologies and paradigm changes became a matter of survive for businesses. The rising startup culture in the last decade of the 20th century started to form the new economy and went through its first crash in 2000. Innovation and the quest for new paradigms contribute largely to this evolution and became an industry of its own. Change, transition and innovation gained enormous speed and turned out to be a question of survival for many enterprises. Grouped around startups a nexus of investors (venture capital firms, corporate venture capital, private equity and business angels) and a supportive structure of accelerators and incubators was developed. The volume of global venture capital investing has grown since 2008 and is still on a high level, having reached an all-time high of $140 billion in 2015, concentrated in US and showing a rapidly growing volume in Asia. 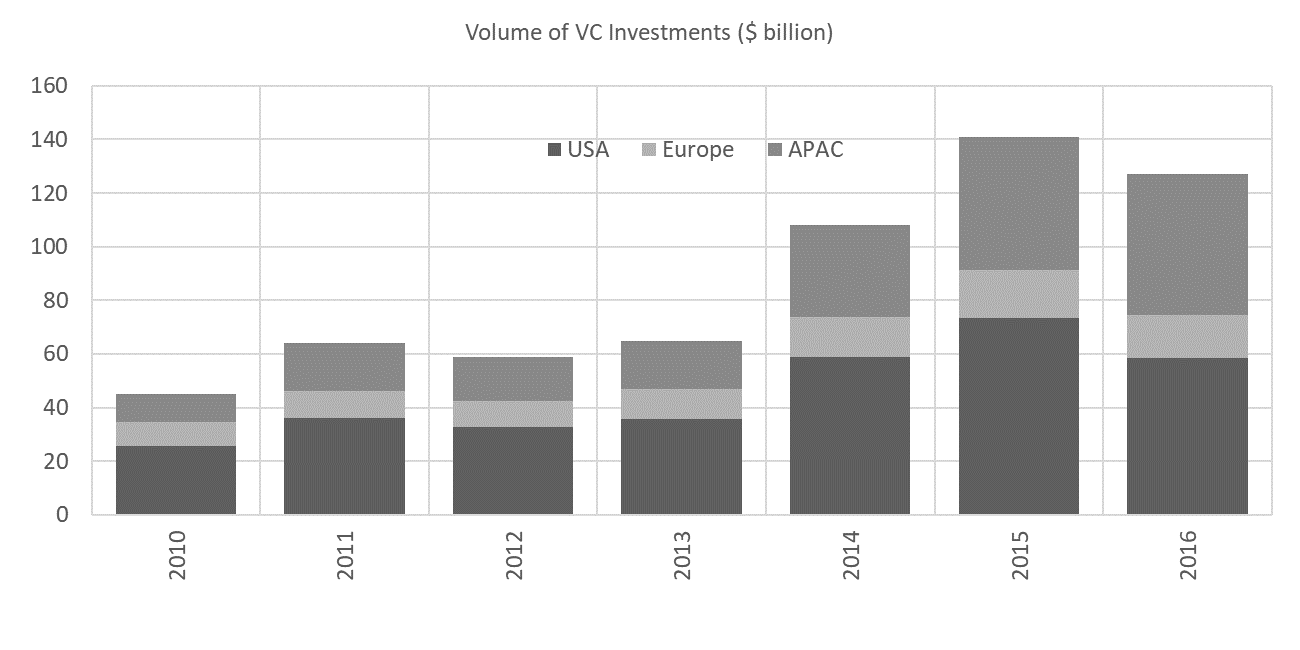 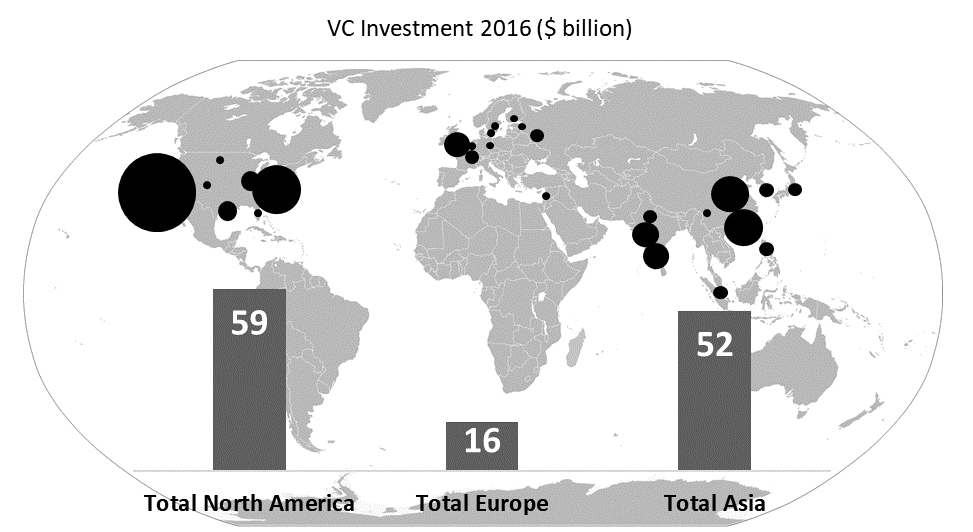 Living in a Virtual World

Taking the first year of the new millennium as the checkpoint, the economic, social and political environment went through vast transitions since the burst of the dotcom bubble. Internet, Web and cloud follow the path of other network-based ecosystems which proved to be a successful approach in the past. The dimensions of the released digitalization are huge: data and information stored and communicated was moved from analog media to digital media reaching more than 80% today, the worldwide capacity of computing and storage resources increased by the factor of 1000 within ten years, the total Internet traffic increased by the factor of 1000 between 2000 and 2016. In this stormy weather, geographical borders seem to fade away, globalization’s effects influence economic systems and social life. Traditional industries face challenges when transitioning to digital business models, hunted by startups born on the Web. Privacy and the border between private and public space is constantly redefined and changes with every new type of service offered on the Web. Hand in hand with economic and technical revolutions the growth of cloud based services influenced social behavior and created impacts on politics. Introducing and using this nexus of communication and interaction is also accompanied by the rise of new forms of crime, cyberwarfare and misuse of social media platforms for offenses, fake news, mobbing or organizing terroristic activities, living in a virtual world demands new rules of interaction based on guaranteed trust. Compared to railway, telegraph, telephone or broadcasting the impact of a global cloud service based eco-system is dramatically bigger, it will change our life with so far unknown accelerating speed. 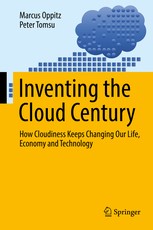 Marcus Oppitz (startup-founder, entrepreneur, business angel, aaia member) and Peter Tomsu (network architect, CTO, member of DMTF, NIST, ITU-T and ISO workgroups responsible for definition and standardization of cloud and network architectures) took the challenge to follow the path of network based service ecosystems leading to the cloud century as successor of the electronic century and initiating the fourth industrial revolution based on digital computing, Internet, big data and analytics, peer-to-peer computing and cognitive computing. “Inventing the Cloud Century” tells the story of the dramatic development of cloud based services in a detailed 600 pages’ book, including more than 150 graphics and tables.

The book moves along two lines. The historical line explores the evolution and creation of network based service ecosystems. It shows that our current experience with cloud computing and cloud services is the result of an at least 200-year evolution and will also project the current trends into the future. The second line focuses on the interlock between technology, economy and social effects. It narrates the epic stories about technology inventions, the ﬁght for ﬁnding standards, and the economic processes creating successful business models and ecosystems, and the propelling effects of social impacts.

The structure of the book combines the three dimensions of technology, society and economy to explore the advent of today’s cloud ecosystems as successors to older service ecosystems based on networks. Further, it describes the shifting of services to the cloud as a long-term trend that is still progressing rapidly. The book adopts a comprehensive perspective on the key success factors for the technology – compelling business models and ecosystems including private, public and national organizations. The authors explore the evolution of service ecosystems, describe the similarities and differences, and analyze the way they have created and changed industries. Lastly, based on the current status of cloud computing and related technologies like virtualization, the internet of things, fog computing, big data and analytics, cognitive computing and blockchain, the authors provide a revealing outlook on the possibilities of future technologies, the future of the internet, and the potential impacts on business and society.